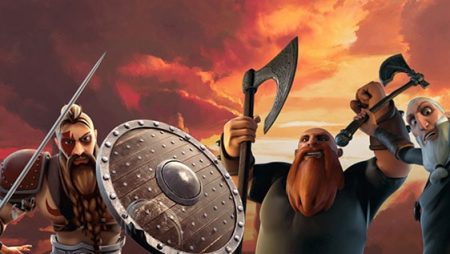 Do you fancy joining Vikings on a treacherous journey across the waters? You can do that right from your computer or mobile device by playing some of the best Viking-themed online slots. Listed below are the five greatest Viking slots of all times. Are you ready to spin the reels? Here you go.

Become a part of the brave Viking crew and take part in a life-threatening battle in each of these slot games. The best part is you can practice on these slots without making any investment. Before you deposit real money at online casinos to play these slot games, you can try out the fun mode for any of the following slots. Unveiled below are the 5 top Viking-themed slots.

This slot is themed on the popular TV series by the same name. It boasts of some excellent graphics and you can play with both low-paying and high-paying symbols. NetEnt has done a brilliant work in designing this slot game and that is why we couldn’t find anything that this game lacks.

This is a highly volatile slot to play. You have a chance to play not one but four bonus features here. Would you like to win 10,000 times of your bet amount? Hope to play the Raid Spins feature. The other three features are named Hotspot, Shield Wall and Scatter Pays.

This is a medium-variance slot game that offers a return to player percentage of 96.8. It comes with two bonus features, one of which is activated by Thor and Loki symbols that can appear on the middle reel. Additionally, these icons can reward you more wilds.

The second bonus feature, namely the Viking Gods, can be activated with stacked wilds appearing on the middle reel. It can offer numerous rewards to the lovers of the Viking theme slots. It comes with fifteen paylines and has graphics that Playson developers have designed pretty well. And this is not all! You can get to witness sticky wilds and free spins too provided your lady luck is with you.

Vikings Go Wild Slot is part of Yggdrasil Gaming’s Nordic slot series. The other two sequels in this series are Vikings Go Berzerk and Vikings Go To Hell. Adventure lovers must try out this slot at least once.

The slot game starts with a tastefully designed animated introduction. Here you are on a quest to fight with an enormous sea monster. This battle can give you a chance to play the Treasure Chest Bonus feature along with free spins, wilds and also sticky wilds.

Here you can play with the Mega Win Icons that increase you potential to win manifold. You can win up to 64,000 coins here. If you are able to land five wilds on an active payline, you win 1000 coins. All you have to do is start spinning the reels after choosing the initial bet.

You can play with wild and scatter symbols here. To make matters more interesting, we have the Free Spins feature, in addition to Gone Fishing and Chest of Fortune bonus feature. Sounds cool, doesn’t it?

Have you ever played a slot game with cascading reels? Here is the Viking Runecraft slot that lets you do exactly that. In this feature, the symbols that form a part of the winning combinations disappear and new symbols fall from above to take their place. This slot game is inspired by epic stories of Norse Gods and is played on 7 rows and 7 reels. You have the chance to make the biggest win of 5000 times of your bet amount.

This slot game holds true to its Viking theme. The reels are adorned with symbols such as helmets, necklaces, amulets and hammers. Additionally, Viking Runecraft Slot is loaded with bonus features such as free spins feature, Gift of the Gods, Rune of Valhalla in addition to four fantastic Charge of Destruction bonus rounds.