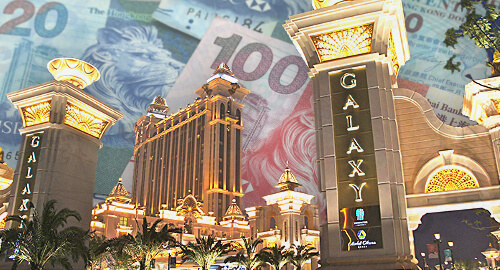 In the final quarter, the Galaxy Entertainment Group (GEC), a Macau based casino operator has reportedly recorded a lower number of VIP gamblers. This has led to a decline in the earnings of the casino.

As per the latest statistics released, GEC had recorded gaming revenue worth HK$10.74b (equivalent to US$1.34b) in the last quarter of 2019. This indicates a decline that this Hong-Kong list casino has shown from their last quarter in 2018. Reports reveal that despite the efforts the adjusted earnings recorded a 6.5 %fall over the year.

The latest reports reveal that the mass table drop has lower than before against the win rate that escalated. The mass table revenue was recorded at flat HK$7.3b. Akin to the flat revenue, the electronic gaming volume, as well as the wins, also didn’t peak.

The decline in these figures showed upon Galaxy Macau which is a flagship property of the Galaxy Entertainment Group. The revenue from the property went down by 10% recording HK$9.33b. The earnings also fell by 6.4% to HK$3.2b. The only silver lining was that the property’s hotel business boomed with a confirmed houseful status.

The VIP turnover didn’t look promising even at StarWorld Macau as it faced the brunt of a larger percentage decline in their VIP turnover. Once again the turnover escalated from 0.8 points to 3.5%. This was noted to outperform the existing range. The impact was the property’s overall revenue fell by 11% whereas the earnings were stalled at 12%, closing at HK$782m.

On the other hand, Broadway Macau, which does not have a VIP component, reported a rise in the revenue which can be attributed to their non-gaming facilities alone. This reportedly increased the property’s final quarter earnings by 2x to HK$16m.

The small gaming ventures branded under City Clubs in non-GEC hotels, Macau experienced a rise in their revenue. It was the VIP enthusiasts that made this a reality contributing to the revenue increase which escalated to HK$566m. However, the earnings fell by 3% to HK$28m.

Throughout 2019, GEC’s revenue recorded a low and went down by 6% to HK$51.9b. This was due to a fall in gaming revenue. The overall annual earnings fared better as the fall was recorded at 2.2% to HK$16.5b.

As cited by GEC, investor sentiments had been lately experiencing volatility. Last year it was the US-China trade war along with the global economic slowdown and the VIP smoking ban imposed in Macau.

In a recent statement, GEC representatives addressed the global Coronavirus crisis as impacting its financial performance. They said it would be difficult to project the 2020 performance report. The crisis had already hit with the Macau casinos having to shut down for 15 days. Some casinos were allowed re-opening last week.

The GEC Chairman, Lui Che Woo exclaimed that the company’s daily expenses had soared during the closedown. He urged the Macau government to ease the tax burden after his rival SJM Holding’s CEO raised the issue last week. On the Galaxy Macau’s expansion, Lui said that they were on schedule as far as the opening concerned. The current expansion plan intends to expand the hotel’s capacity by 4000 new rooms, a 16,000 seat arena and 400,000square feet MICE area along with a host of other retail options.

GEC confirmed that they were looking forward to claiming their space in the beauty contest as they seek the casino licenses for their forthcoming business in Japan.