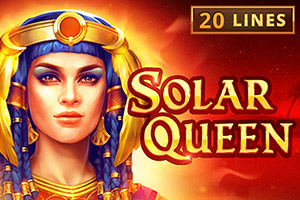 Know of Playson? Well, they happen to be one of the most popular software providers around and their slots are reputed to taste better than hot cakes washed down with cold milk!

Anyway, these fellas a few short days ago launched an online slot by the name of the Solar Queen. To promote it they also set up a tournament the likes of which the world has yet to see!

Read on for the inner scoop on this!

Glory Be To Her Majesty!

No one but Playson could have set up a slot with a hackneyed theme and prettied it up enough to make players go gaga! And that’s not all, not by a long shot! This slot also comes with a tournament prize pool of around ₤30,000, which should be more than enough to get most fellas solidly drunk for a couple of weeks at the best London bars!

Now, the Solar Queen slot has been out for a few days as we have already stated. For those who don’t know what it is all about and have yet to clap eyes on its very colourful reels, this slot is themed around Ancient Egypt. The spinning action takes place across 5 reels and 20 paylines, and there’s enough eye-candy in view to send a hippo trumpeting for cover!

The biggest thrills of the Solar Queen slot are locked within its Hail the Queen Tournament. It is there that players can get blessed like nobody’s business!

According to Playson, both their new Solar Queen slot and its accompanying tournament will launch at the same time. The launch is set for July 18th, 2019, which leaves plenty of time for most folks to dump whatever was scheduled and catch ahold of this Playson-provided fun and thrills!

The tournament is just the thing players need to enhance their bankroll and show their teeth with a will! The sizable prize pool is reserved for the best ranked 100 players and the tournament is scheduled to end on July 28, 2019.

All the prizes will be in cash, rather than spins or the like and more than 250 Playson casinos have indicated their willingness to take part. The top 3 ranked tournament players can expect to walk away with from ₤3000 to ₤6000.

For folks to qualify for the tournament, they are required to play in real money mode. They must as well deposit at least ₤0.50 or the currency equivalent.

All wins in the game add to the score of players, which can be seen on the global leaderboard. In calculating points, a single point is equivalent to a single coin bet. Thus, if ₤10 is won on a bet of ₤1, which equals multiples of 10, it translates to 100 points.

At the end of the Solar Queen slot tournament, all prizes will be paid off in 72 hours or less. So, readers are encouraged to seek out the Playson casino that is best to their taste, sign up for the tournament and beseech Lady Luck to shower forth her blessings!

However, for the most optimum gameplay enjoyment, a thorough reading of the attached terms and conditions is advised.